Virtual Dance Floors: Shall We Dance or Fly?

Digital platforms as technological infrastructures that support human flows and social dynamics of all kinds are today even more essential to guarantee the continuity of some of our habits, now suspended. In cyberspace we are experiencing aesthetic and technical recreations and behavioural reconfigurations, some collective and others individual, some optional and others imposed, because apparently the world has changed. Since the reconfiguration of the global digital society in the 20th century, Electronic Dance Music (EDM) has also been reframed by translocal, transglobal and transvirtual movements (Bennett 2004) with migrations to the web and within the web.

In the present era many already consider post-digital society, does it still make sense to continue to separate the physical/organic from the digital/technological experience? Or is this metaphorical separation between real and virtual not appropriate anymore, considering that everything is reality as long as it is experienced? From the tangible real to the imaginary virtual, the reality in fact may just be a matter of perception (Deleuze and Parnet 2004). Lévy (1998) already stated that in digital networks nothing is false or imaginary, that virtual dynamics are identical to the physical as long as they are consciously experienced.

In Second Life (SL), a real time immersive 3D environment that simulates the real and social life of humans extending their physical and organic life (Kahn and Kellner 2003), there have been musical events for some years, from raves and EDM festivals to virtual versions of Burning Man (Burn2).

In territories like SL, people have been listening and dancing to psytrance in virtual dance floors for over 12 years, sharing psychedelic experiences with their friends and their second selves (Simão, Silva and Magalhães 2015). Nowadays, from SL to PLUG DJ to social networks' live streams and other similar platforms, these virtual experiences seem to be more effective than ever: virtual dance floors and performances are not totally new phenomena but are growing exponentially.

It was predictable that social networks would reach a point of saturation and emptiness (Turkle 2011) and perhaps immersive environments and virtual reality (VR) experiences will now gain more users. In effect, these environments are more conducive to simultaneous sensory stimuli for a better and more reliable extension of the human experience (Myeung-Sook 2001).

Taking the SL psychedelic trance virtual gatherings as examples, we know that for many virtual dancers, the digital dance floors can be extensions or alternatives to physical parties, but not substitutions (Figure 1). 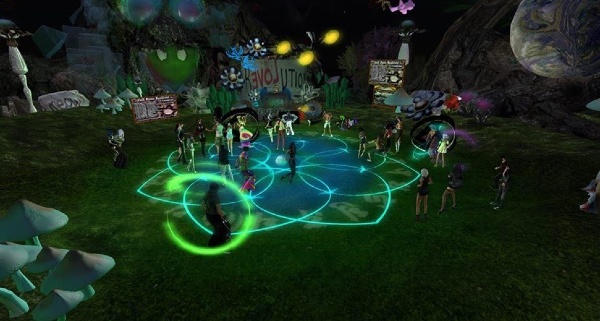 When attending these environments, the psyvatars (Simão and Guerra 2016) point out limitations to the virtual dance floors, namely: the lack of human warmth, the direct interaction between pairs, the lack of movement and dance ritual, the resignation of the body (not in the sense of alienation or psychedelic experience, but in terms of physical perception) and the lack of multisensory experience. On the other hand, others argue that the objective of the party is reached as long they have the fundamental—the music.

The subjects who are more connected virtually are often more connected physically or in person (Wellman et al. 2006) and in these SL communities (even smaller than other EM and EDM communities), the feeling of belonging and empathy between the virtual members is quite evident. Beyond these similarities there are other parallels between the conventional and the virtual dance floor: musical aesthetics, empathy between members, the figure of the DJ and the centrality of the dance floor, decor and visual expressions, clothing, accessories and recreational consumptions, among others. It is also important to mention the constant concern in recreating the main elements of the physical parties. More than a simulacrum, these events are thus framing their own place and identity.

This imposed digital migration has clearly intensified the virtual dynamics, as well as boosting the hybridism of these digital incubators, but even though these virtual dance floors and online music events in general have proliferated in the first months of 2020, it is more prudent to consider them viable alternatives than effective replacements. Today we are living in the territories of the future surrendered to the permeability and fluidity of the cyber-era (Wilson and Atkinson 2005), listening and dancing to electronic and algorithmic music, but are we prepared to give up the real-physical-offline-sweaty dance floors? In the coexistence of isolation and crowds, the dance floor warriors must resist becoming purely egovatars of cyberspace and keep festivals and rave culture alive (Simão and Guerra 2016).

Emília Simão is vice-Director and Professor of Multimedia and Arts at the Gallaecia University and at the Portuguese Catholic University, Portugal. She focuses her research on EDMC, Neo-Tribes, Digital Aesthetics and Media Arts. Emília is the founder/co-coordinator of ObEMMA- Electronic Music and Media Art Observatory and also member of CITCEM- Research Centre for Culture, Space and Memory (UP) and CiESG-Research Center on Multimedia and Arts (ESG). She co-authored the edited books Exploring Psychedelic Trance in Electronic Dance Music and Modern Cultures (IGI Global, 2015), Trends, Experiences, and Perspectives in Immersive Multimedia and Augmented Reality (IGI Global, 2018) and Multidisciplinary Perspectives on New Media Art (IGI Global, 2020).

Paula Guerra is Professor of Sociology at the University of Porto and Researcher at the Institute of Sociology UP. She is part of other national and international research Institutes: CEGOT, CITCEM, Dinâmia’CET and Griffith Centre for Social and Cultural Research. Paula is the founder/coordinator of the KISMIF project and co-coordinator of the KISMIF Conference (www.kismifconference.com/en/). She co-authored the edited books DIY Cultures and Underground Music Scenes (Routledge, 2018) and Punk, Fanzines and DIY Cultures in a Global World (Palgrave, 2020).

Simão, Emilia. and Paula Guerra. 2018. "Territories and Mobilities of (Trance)Virtuality: The Second Life of Freaks". In IS Working Papers, 3rd Serie, N.º 11, 2-20. University of Porto: Porto.

Turkle, Sherry. 2011. Alone Together: Why We Expected More from Technology and Less From Each Other. New York: Basic Books.