“The Only Good System is a Sound System”: The Dub Riddim Revival in Kingston

When Lee “Scratch” Perry won a Grammy in 2003, I remember listening to a programme on Jamaican radio in which the hosts were answering calls from people wondering just who this “Scratch” person actually was. Sure, his Jamaican E.T. album had just won a major award, but there were few people who seemed to know anything about the man. There was awareness of some of the songs Perry had produced, but little awareness of the production creativity so celebrated outside of Jamaica. As a Canadian reggae fan who had moved to Jamaica thanks to a government volunteering program, I was shocked. How could people not know about this dub reggae pioneer? But I am, as people in Jamaica say, “from foreign”.

Whether through sweeping studies like Michael Veal’s Dub: Soundscapes & Shattered Songs in Jamaican Reggae (2007) or statements from Perry biographer and reggae historian David Katz that “dub has proven to be the most influential reggae sub-genre of all” (2014), it is clear that dub is foundationally important. Past its heyday in the studios and (sometimes) dancehalls of the 1970s, however, it has not always been popular in Jamaica.

At the time of Perry’s Grammy win in 2003, you would have been hard pressed to hear dub in Jamaica. If interested in that syrupy slow thump, Jamaica would have been a disappointment. To hear dub reggae riddims, played on a strong, sturdy, bass-driven sound system, you’d have had to go to the UK for Jah Shaka or Iration Steppas or Channel One. But in recent years, things have changed. Though dancehall is still Jamaica’s popular music and available on the radio and in the street at pretty much every hour of the day, every Sunday evening you can now pay a visit to Gabre Selassie’s house to hear his Rockers Sound Station sound system at Kingston Dub Club. Yes, even he admits that the idea of Dub Club came from the UK, but it is nice to hear dub back on Jamaican shores. And it seems like interest in dub is expanding. 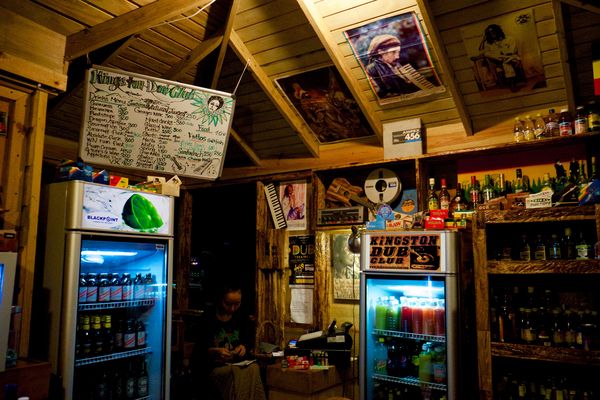 Though it has been around for over a decade, it is only really been in the past couple of years that Dub Club has been a thing in Kingston. But on Sunday evenings, up on Skyline Drive—a road that seems to hang precariously on the edge of the hills looking over Kingston—Gabre hosts sound system legends like Saxon and King Jammy’s, asking them to drop in and demonstrate their talents. Over the past year or so the crowd has grown so large that a larger balcony and bar has been built (one no longer has to enter Gabre’s house to use the washroom), and there’s probably over a couple hundred people—many are regulars, but there is representation of folks “from foreign” as well—who pack the yard every week. Inspired by Dub Club, there have been events that have cropped up all over the city, from uptown to downtown, from Hope Road to Crossroads to lower First Street in Trench Town: Inner City Dub, Dubwise, Vinyl Thursdays, Trench Town Rock Saturdays...

As part of what is referred to as a “reggae revival”, I’ve read more than a couple articles that seem to suggest that the upsurge in dub alongside the rise of the revivalist cadre of artists like Jah 9, Chronixx, Protoje, Kabaka Pyramid, Jesse Royal, Iba Mahr, Kelissa and so on, would seem to indicate a shift away from dancehall. But I think it is more of a reminder of how, at the centre of musical experience in Jamaica remains the sound system: the huge speakers and amplifiers that can be set up anywhere and at anytime, transforming car parks, streets, fields and beaches into dancehalls. The sound system has origins reaching back to the 1950s, when soundmen would connect record players to large, custom built speakers. The history of the sound system has been outlined by numerous scholars, but Sonjah Stanley-Niaah focuses specifically (and helpfully) on the ways in which sound creates and recreates spaces in Jamaica (2010), and Julian Henriques on the effect of these sound spaces (2011). Dub may have blossomed in the studio, with production luminaries like King Tubby, Scientist and Jammy’s, but it began on the sound system—and it is the sound system that is at the heart of the music in Jamaica.

Whether the system is playing dancehall, roots, dub or Celine Dion, it is the sound that creates the space—the sound carves a dancehall out of a Kingston street or a backyard on Skyline Drive. The sound system can carry any kind of music, as can be observed through the popularity of the North American mainstream phenomenon of EDM (electronic dance music) which has also arrived on the island, with promoters pitching EDM parties. The sound system is malleable—and the selectors know that they are responding to the crowd. Chatting online to Michaelangelo Matos, author of The Underground is Massive: How Electronic Dance Music Conquered America (2015), he told me that “the thing with EDM system culture is that it's not really at all about interaction. It's about spectacle. I have no problem with spectacle, per se, but it’s a wholly other paradigm than the selector responding to the audience in kind.” It doesn’t matter the music—with the sound system, it is all about what the audience wants.

Gabre Selassie, when I went up and visited him at his home during the day, when the view is even more breathtaking, told me that his goal is to provide an option—to respond to a need—and to answer to the audience. People want to hear dub. Just like how people at the forty-years-old-and-still-running Rae Town Old Hits Sunday street dance want to hear Barbra Streisand, Barry Gibb and Rick Astley (so Klassique Sound will respond in kind), so too is Gabre inviting anyone who wants to hear roots, rockers, reggae and dub—both classic and new—over to his house for a weekly party. And Gabre thinks that an ideal plan would be Dub Club followed up by Rae Town. These events both centre on the sound system.

I always tell people that I fell in love with reggae not because of Bob Marley, but because of Stone Love—one of Jamaica’s most legendary sound systems. I’ve spoken to soca fans who insist that even the most resistant people will fall for the 150 BPM speed of power soca as long as it is introduced on the road. As a recent convert to the music of Machel Montano, I’d probably agree and I think that you might say the same thing for the sound system. It really is about the space that the sound system can create. For me, if I’m honest, dub has never been my favourite style of reggae. Though I could happily listen to the Lee Perry-produced Heart of the Congos over and over again, I was never one for late-night dub-driven listening sessions. But Gabre’s Dub Club changed that. Dub works in the car, on headphones or at home, but Dub Club is a different space. Sure, it’s about the music, but it’s also about the sound system. A mural that sits behind where the Dub Club stack of speakers is strung features further images of speakers and the message “The only good system is a sound system”. I can certainly get with that.

Erin C. MacLeod teaches Caribbean Literature at Vanier College in Montreal, Quebec. She has also been a lecturer in the Institute of Caribbean Studies at the University of the West Indies, Mona Campus, Jamaica. She is the author of Visions of Zion: Ethiopians and Rastafari in the Search for the Promised Land (NYU Press, 2014) and has written about music and popular culture for the Guardian, Rolling Stone, Pitchfork, and Wondering Sound, among others.