Saboritmico: A Report from the Dance Floor in Mexico

Luis N Del Angel, McMaster University
Currently a PhD student in Communication, New Media, and Cultural studies at McMaster University. His current research intersects with live coding, Artificial Intelligence, and software studies. He also holds an MA in Communication and New Media from McMaster University and a Licenciatura in Music Composition from Academia de Música Fermatta (Mexico). From 2010 to 2013 he worked at the Multimedia Center of the National Center for the Arts (Mexico) exploring the possibilities of free software and the paradigm of live coding. In 2012 he collaborated in the creation of the International Symposium of Music and Code /*VIVO*/ (Mexico). As part of the live coding collective RGGTRN he has performed at venues in Mexico, Spain (2014), France (2014), Switzerland (2014), and the UK (2016). As a member of the Cybernetic Orchestra directed by Dr. David Ogborn, he has performed at the International Conference on Live Coding, ICLC 2016 (Canada 2016), ICLC 2017 (Mexico 2017), and NIME conference 2017 (Denmark 2017). 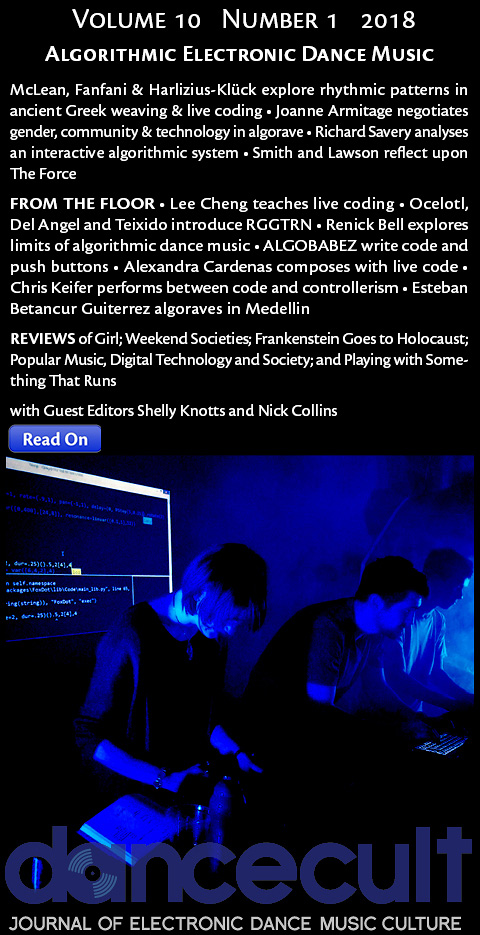 Published
23-Nov-2018
Issue
Vol 10 No 1 (2018): Algorithmic EDM
Section
From the Floor
Authors who publish with this journal agree to the following terms:
Information
Make a Submission