“Clubs aren’t like that”: Discos, Deviance and Diegetics in Club Culture Cinema

This article considers ways in which filmmakers have attempted to address the subject of electronic dance music culture on the big screen. In what ways have directors tried to visually represent EDMC in fictional narratives? And to what extent have they been capable of capturing the recognisable elements of this phenomenon, by expressing its tropes and spirit in a plausible and credible fashion? Is it possible to distil the energy of the dance floor and represent the actions, practices and attitudes of its participants for an arguably passive cinema audience? How, for instance, can a key component of this subcultural terrain—drug consumption—be effectively illustrated through the devices of the movie director? By providing textual analysis of two recent, and similarly titled, North American productions—Ecstasy (dir. Lux 2011) and Irvine Welsh’s Ecstasy (dir. Rob Heydon 2012)—this account aims to describe, and critique, both the creative approaches and technical devices adopted to solve this artistic problem. With attention to the work of Sarah Thornton, Stan Beeler and Simon Reynolds, this study will also raise questions about authenticity and verisimilitude in an intermediary field in which the dance floor becomes the subject of the non-documentary storyteller and the focus of the camera lens. The article concludes that when a primarily sonic and social medium is re-configured in a visual format, the results, while superficially engaging and entertaining, struggle to capture the charged excitement of the nightclub, the inspirational potency of its soundtrack and, ultimately, the genuine experience of the individual clubgoer.

Simon Andrew Morrison, Leeds University
Simon A. Morrison has worked within club culture for the last 15 years.  Author of the book Discombobulated - a collection of Gonzo columns penned for DJmagazine and published in the UK and US by Headpress - he has reported on nightclubs everywhere from Beijing to Kosovo.  Simon has presented TV and radio, edited Ministry of Sound’s Ibiza magazine and continues to write freelance and run a music-based PR consultancy.  He is currently studying the counter culture within the School of Music at Leeds University, with particular reference to club culture 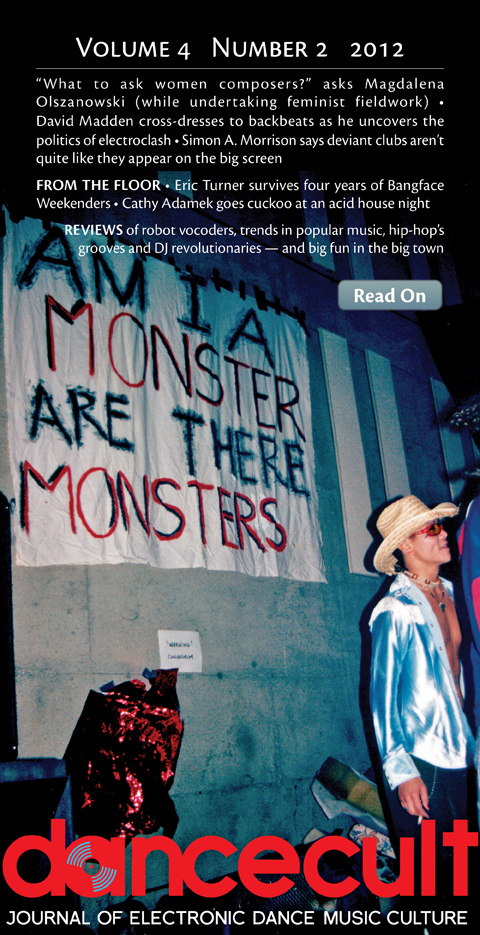